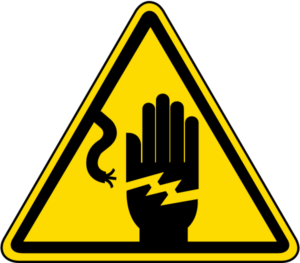 The Tesla coil was invented by Nikola Tesla, around 1891. Its original purpose was to transmit power wirelessly, and it worked. This was a remarkable achievement for the times. Even today, you can find the technology in many modern devices. Though it is best known for its ability to form impressive bolts of artificial lightning.

By using modern control, we use these machines as a visual effect. Besides their impressive display, they can produce audio sound effects. From musical notes to rhythmic pops and thuds, their abilities are vast and growing.

Tesla coils were developed before solid-state tech. Prior to this, they used parts like inductors, capacitors, and spark gaps. While they are a great educative tool, they are not ideal for stage use due to the powerful EMI produced.

These machine produce effects that include:

Fiber optic cables make the physical hardware connection. This is for transmitting MIDI data without worrying about EMI.  In addition, we can get the controlling device further from the Tesla coils.

Tesla coil systems require careful control. Our USB MIDI devices are custom-built to meet the needs of live performance.  They will work natively with MIDI software. The MIDI standard is a bit old, and not all devices use it correctly. Our software has been adjusted to handle several peculiar systems.

For analog instruments, we have a device that converts audio into a control signal.  The Tesla coils can interpret this signal. This makes it possible to use any instrument with an audio out. Guitars or synthesizers, or even the headphone out on your cell phone. As a result, we can bring many artistic visions to life. 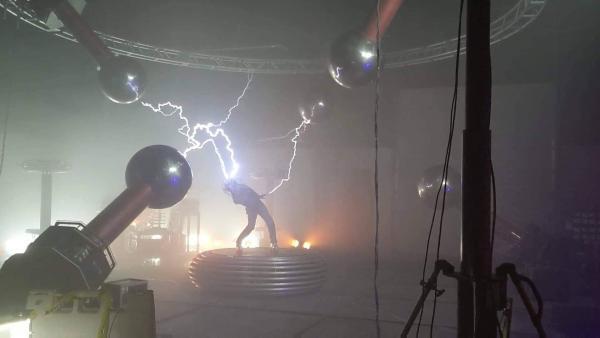 To ensure entertainer safety, they must wear a Faraday suit. A Faraday suit is a version of the more popular Faraday cage. The suit protects a person from electrical hazards. It works much the same way that a lightning rod would for a building.

Chain mail is the most common material for Faraday suits. It is effective but too heavy for more involved performances. Our team has put a lot of research into making cutting edge outfits. The new designs are comfortable, and safe. Our standard suits include a full bodysuit, a helmet, neck guard, boots, and gloves.

We have various sizes of rental suits, or they can be custom designed for the wearer. They are constructed from flexible steel mesh and fire retardant fabrics. The helmets are made of metals and other resilient materials. We can modify most footwear as long as they provide above the ankle coverage. Our preference is a mid-calf leather boot.

Distance is the most important factor in crowd safety. We recommend the sum of the arc length plus 10 feet. It is based off of how far we can expect a person to reach past the fence. The exact measurement will vary per installation. 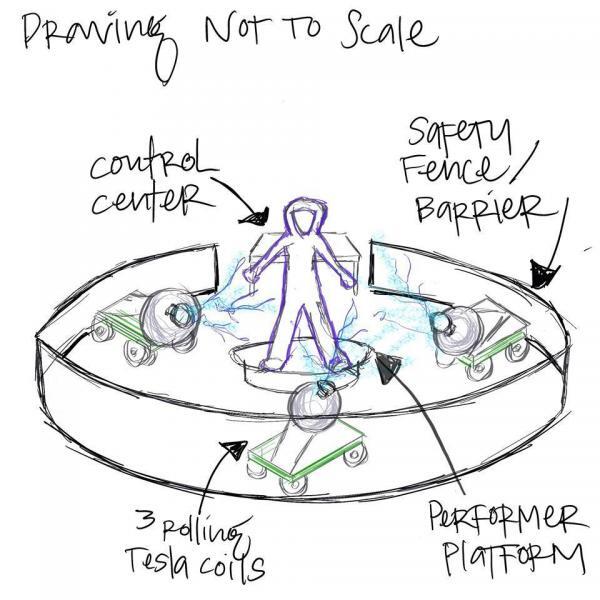 Tesla coil setups on the ground require a safety fence. This prevents attendees from getting close to the performance area. 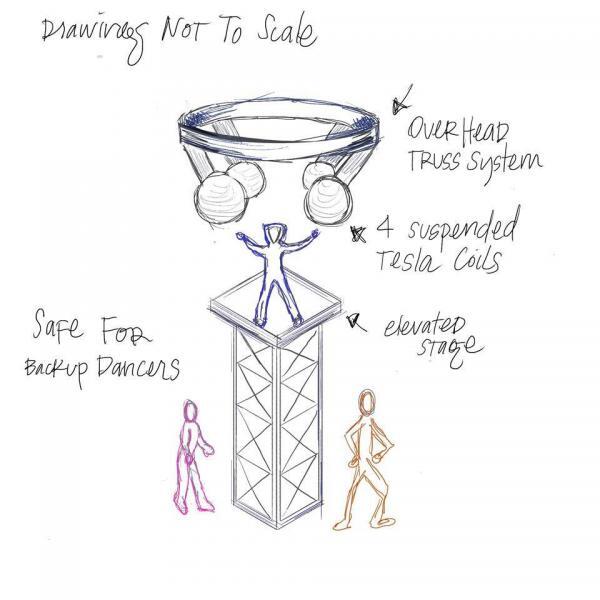 Overhead setups make it possible to eliminate the barricade. They must be high enough to satisfy the required safety distance.

Plasma is hot! The lightning is ionized gas, which reaches high temperatures.  All materials in the target area must be fire retardant. In addition, fire extinguishers should be present in at least 2 places.

The process of ionizing air creates a quantity of Ozone and NO2. We recommend monitoring ozone levels indoors. Outdoors is generally safe. The exception being when a performer is exposed for long periods.

Each Tesla coil in our system has a double rack unit that controls it. The rack unit connects to the hung Tesla coil with a twisted pair cable. This cable transmits the inverter output to the resonator. It allows us to keep the control electronics on the ground. An excellent feature for ease of access. 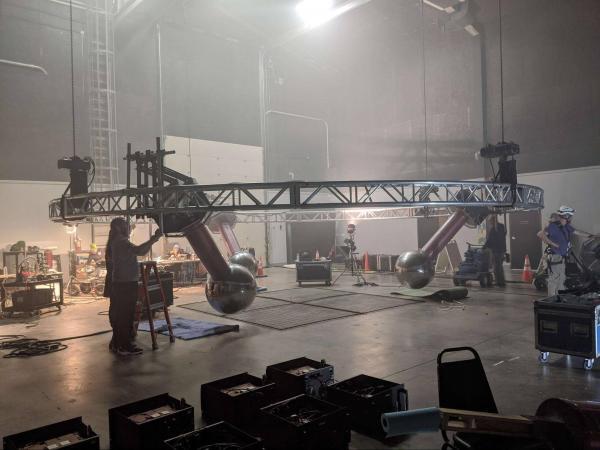 This is one unit containing the primary, secondary and top-load. This is the unit from which the lightning effect originates. Often referred to as simply the “Tesla coil”. 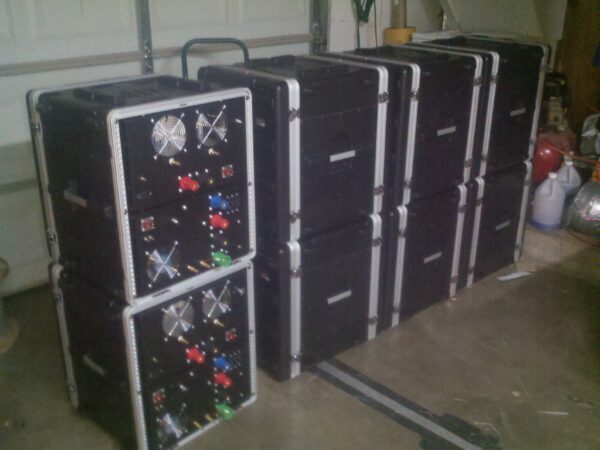 The control rack consists of two units, the power supply, and the driver. The power supply is an active power factor corrector. It provides a stable DC bus while minimizing noise and sudden load changes. They are highly reliable devices.

The units use water-cooling. There are two main benefits to this. First, water is very efficient at cooling electronics. Second, it allows us to make the coil units more compact. The benefit of this, is that our machines are less bulky on stage.

The driver consists of a digital controller and an H-bridge of IGBTs. It drives the resonator with a twisted pair cable. Depending on the setup, the cable length limit is about 100 feet.

The power supply and inverter are controlled by PC software. Each rack unit is made to receive data, and then send it to the next unit. This is similar to a DMX lighting fixture. The hardware connection is with st/st fiber optic cable. Using fiber optics ensure resilience to EMI.
An easy to use interface is integral to Tesla coil safety. Our PC software is cross-platform and highly developed. It’s important to look at the screen and see what is going on easily. Also, to be able to change settings without hassle.

The main power interface is a custom-made Camlok distribution unit. It receives a 5 wire in and has eight, five-wire outputs. These outputs route to each Tesla coil’s rack unit. This unit contains a 3 phase contactor for the emergency turnoff. In addition, it contains an EMI filter to minimize noise. We recommend using generator power for complex setups. Generator and cable ratings depend on the exact setup required.

In our experience, the undesired effects fall into 2 categories. First, Magnetic pulses that emanate from the spark and resonator. Second, high current pulses in ground cables affect data and signal cables. When ran together in long parallel lengths, it can cause problems. Both conditions are most present while the Tesla coil arc is striking an object.

The top-load of a Tesla coil is a capacitor. It can store quite a bit of energy. When the arc connects to ground, high currents are present in the spark and ground wires. As a result, these currents produce troublesome bursts of EMI.

We have developed several methods for minimizing these effects. Though techniques can vary, we will cover some of the most common issues.

Tesla coils can leak current into ground networks. Using a separate ground rod for the coil is an easy solution. This makes it easier to keep these cables away from data lines as well. We recommend about 4 feet of space between ground and sensitive cables. 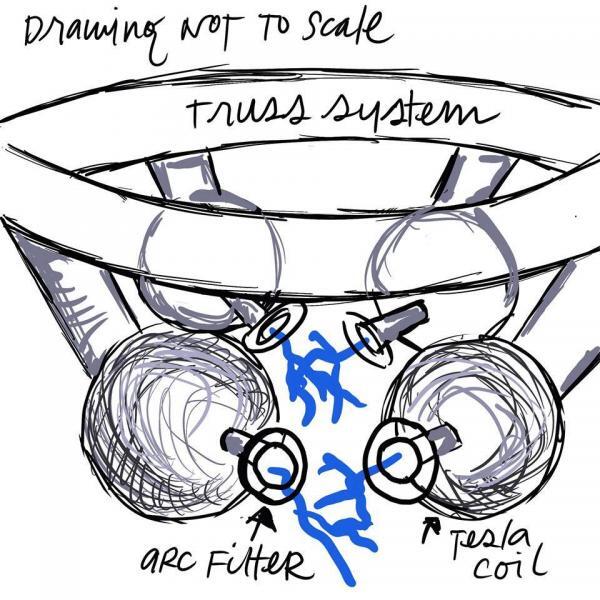 The arc filter is an inductor that serves as the “breakout point”. It’s the point at which the lightning effect emanates from. As a result, the inductor’s reactance slows the top-load’s energy discharge. This reduces the emitted EMI by dampening current peaks. While the idea is simple, this is easily our greatest innovation.

Reducing the peak current of the primary circuit limits EMI.  We compensate for this by lengthening the spark event. As a result, we get longer arcs with less output voltage. The output voltage of the Tesla coil is directly related to primary current.

The top-load stores less energy with reduced output voltage. This lowers the peak current of the spark, along with emitted EMI. All of these parameters are adjustable on the fly. This is a bit different than how a Tesla coil works typically. 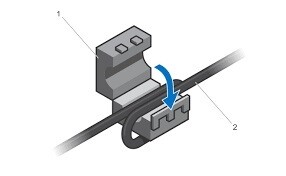 You can find ferrite beads on many data and power cables. They are also a trick that ham radio operators have used for years. They lessen the effects of radiated signals on their control equipment. You can think of it like putting a mute on a snare drum. They can stop the cables from “ringing”.

When used on a balanced signal, they allow the differential signal to pass while reducing common voltage. This is due to the added inductance and hysteretic loss of the core material. We have used ferrite beads to enhance signal quality on many cable types. These include USB, ethernet, XLR, DMX, generic rs-485, and several others.

When using DMX cable, we recommend using optoisolators. Proper placement is at the source, and the end of long runs. Optoisolation is meant to protect hardware from unwanted noise. Optoisolation also exists for other signal types. Among these are Ethernet, USB, and MIDI, to name a few.

Tesla coil operation has little impact on modern radios. When the arc connects to a grounded target, there is broadband noise produced. In our experience, not enough to matter.

Even so, we recommend testing everything before a performance. It is also a good idea to consider how the spectrum may change. As people arrive to an event, certain bands may become problematic. You expect drops in coverage as foot traffic increases. We have seen this happen with Wi-Fi, and even cell signals.

Next, they will alert the crew that they’ve charged the Tesla coils. The phrases, “Coils are charging”, before charging and “Tesla coils are hot!” after they have fully charged. This is also spoken through any comm system.

After the coils start, they will sit with one hand over the E-stop switch. If anything strange happens, the system shuts down instantly. After the performance, the coils shut down and they announce “The stage is safe”.

The second operator handles triggering the Tesla coils to fire. They are also given an E-stop switch. If for any reason the performer needs to stop, they will shut the system down. A hand signal is used to signal any issues from the performer.

It is possible to add additional safety operators. Such as in cases of low visibility.

The E-stop switch physically disconnects the Tesla coils from power. If any of the switches become faulty, the Tesla coil system shuts off. The system will remain off until replacing the switch.